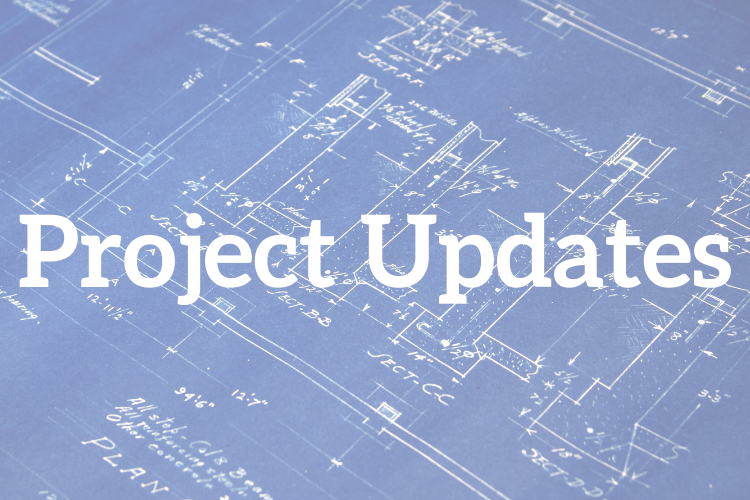 Each year the Fargo Park District dedicates time and resources to enhancing the parks system in the "City of Parks." Below learn more about current, future and completed park district projects throughout Fargo. The list below includes capital improvements, rehabilitation and other projects. Note: Projects with a status of current means the project has been approved by the Fargo Park Board.

For questions on any of the projects listed below, please contact the Fargo Park District at 701-499-6060 or info@fargoparks.com.

To request service at a park or provide feedback on a specific location, please use the Public Feedback Form.

To request the addition of a project to the Capital Improvement Plan, please use the Capital Project Prioritization Form.

A new concrete road will replace the failing asphalt road starting just east of the information center and continue to loop around the main shelter and exit out near the starting point. The three shelters that are along the existing road will also be moved to align with the new road. The existing lower roadway next to the river will no longer support vehicle traffic but much of the footprint will still be utilized as a pedestrian trail.

The existing roadway needs major repairs and its proximity to the river causes numerous closings due to the fluctuating levels in the river. Sections of the roadway are slumping as they are too close to the river’s edge, so this new road will be constructed at a higher river flood elevation, which will result in fewer closures and offer greater access to the park. 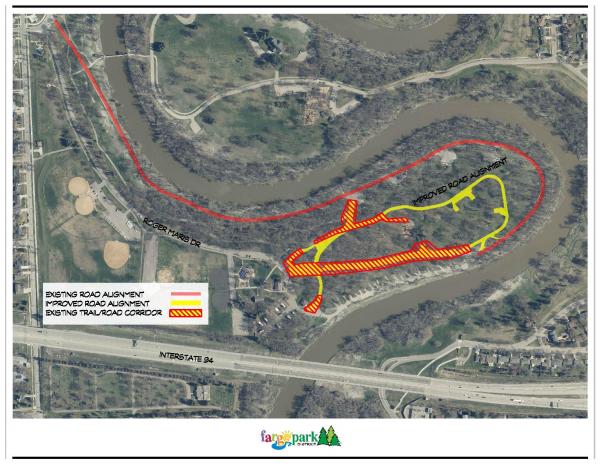 This project constructs a 390 linear foot long by 8' wide artificial turf tee box on the Osgood driving range. Pouring of the concrete is scheduled for late-September with a completion date set for October 29. The turf will be installed in May 2022 with the project scheduled to wrap up in late-May 2022.

This project removes the older wooden poles from along Oak Street and moves the lights in closer to the field to provide adequate lighting for field number three at the complex. Light poles are being reused form the sale of the west diamonds at Anderson Park and will be equipped with new fixtures. This diamond is the last diamond at the complex in need of poles being in closer proximity to the field.

It was recommended at the Facilities Committee Meeting on January 28, 2021 to bring this to the full board for consideration and approval.  At the February 9 board meeting, the Fargo Park Board accepted the bid from Strata Corporation with a base bid of $88,650.00. Funding for this project will come from residual income from the City of Fargo’s purchase of an easement for the flood mitigation levy project.

Estimated Completion:  This is a City of Fargo Flood Control Project. For timelines and more information, visit the City of Fargo's Oak Grove Area page.

At the July 29, 2020 Facilities Committee Meeting, the City of Fargo presented preliminary information regarding the need to construct additional flood mitigation projects within the City. Five of the new neighborhood projects are adjacent to Park District property which will result in varying levels of impacts to the properties and in some cases, amenities. The City of Fargo will maintain access to the park throughout the construction timeline.

They presented the final design for the property adjacent to Oak Grove Park at the February 24, 2021 Facilities Committee Meeting. The City requested approval for an easement to construct the levy. It was recommended at the February 24, 2021 Facilities Committee Meeting to bring this to the full board for further discussion at the March 9, 2021 meeting.

This project is to remove old siding and install new siding on the Rose Creek clubhouse. Projected start the week of October 25, 2021 with completion yet this fall.

The Fargo Park District is in the planning stages for a replacement pool at the current Island Park Pool location. A centrally located summer fixture, the Island Park Pool has served the community in its current design since 1977. The pool and fixtures are outdated and nearing the end of its lifespan.

Please note that the project is still in the planning and budgeting stages and so there is not a set timeline or finalized plan at this point for project completion. One item that is known for certain is that while a complete remodel is being considered for this project, the historic shell will remain intact.

The public has one final summer to swim at the current Island Park Pool. Plans will be made for the pool to open for the 2022 season with demolition beginning in the fall of 2022 after it closes. This adjusted timeline greatly increases the likelihood of the pool being closed for only one season.

Learn more about this project on the Fargo Sports Complex project page.

The Centennial Basketball Courts Project adds basketball courts to the northeast corner of Centennial Park. The additional basketball courts accommodate the need for more amenities at a location with parking available and also help reduce congestion at nearby neighborhood parks.

Removed the old rubber from the Rotary Playground and replaced it with new rubber.

Four pickleball courts were added to Longfellow Park across from Longfellow Elementary School in north Fargo.

Project Overview:  This project was part of the City of Fargo's flood mitigation where increased river elevation through the City from 35 feet to 37 feet during a 100 year flood event required the City to construct additional flood mitigation projects within the City to ensure 37 foot flow would not require any emergency measures.