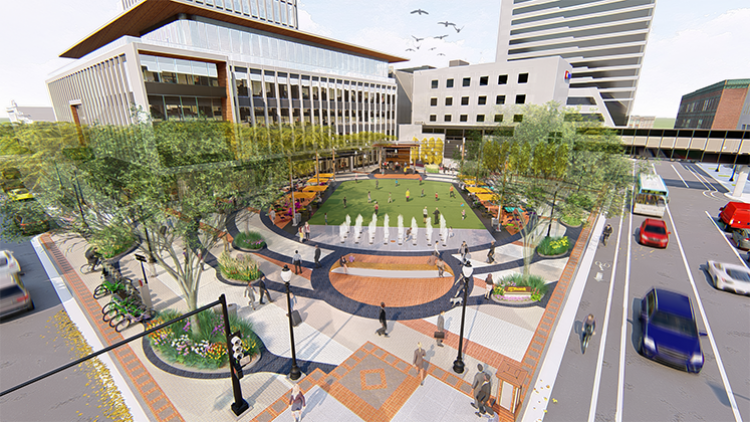 Using our brand consistently and correctly is important to us. We ask that this guide is referenced frequently and adhered to when discussing, promoting or partnering with Broadway Square. This document contains all the information Broadway Square staff and each of its partners, collaborators and friends need to know to help represent us. Included in this document you will find our brand story and identity as well as usage guidelines for logos, colors, fonts and the written word.

If you have any questions on branding, messaging or asset sharing, please email Marketing@FargoBroadwaySquare.com.

Broadway Square’s tagline is not to be used as part of a logo lockup. Instead it is to be used alone, in primarily print and web applications.

The Broadway Square logo should be used in black or white when printing or for online applications. Approval is always required before materials are published, printed, or otherwise used for public view. Please send print-ready mockups to Marketing@FargoBroadwaySquare.com for approval prior to publishing, allowing no less than 48 hours for a review and response.

Do NOT create any additional logo lock-ups, unless given approval by Broadway Square management or the Block 9 Partners to do so.

We recognize that there will be a rare occasion when the logos included in these Branding Guidelines may need a requested modification to accommodate unpredicted circumstances. Submit a request to Broadway Square Management and Marketing Team (Marketing@FargoBroadwaySquare.com) for approval, including a brief justification for the requested change. This submission should be made no less than 30 days out from the intended use/application.

When co-producing an event with Broadway Square, logos of both/all producing entities should be included side-by-side on all marketing materials, in equal sizes and typically with the text “Co-Produced By” above.

View the Branding Guidelines to view the logos, typography and colors for Broadway Square.

Broadway Square works to convey our values in action as we share the stories and accomplishments of The Square. In an effort to create an evolving dialogue with our community, we focus on the themes of engaged community members, collaborations, placemaking efforts and activations, inclusive amenities, urban design and various methods of storytelling through art.

Photographs included in Broadway Square’s official branding, marketing, and social media materials are high-quality, vibrant images with a story to tell. We strongly value images that share a story, capture a meaningful moment, or convey someone’s unique artistic voice. Photos featuring people of all ages, races, abilities, talents, and walks of life engaged with some aspect of Broadway Square are encouraged.

Broadway Square utilizes carefully crafted video stories as well as on-the-fly video interviews, programming snapshots, and video featurettes of The Square and its offerings to share our brand’s efforts and accomplishments with the public. When shooting video for The Square, it’s important to highlight the diversity of the features and opportunities available at Broadway Square, as well as the broad range of public who are experiencing and utilizing Broadway Square.

Following the long tradition of “town squares,” Broadway Square should be referred to as a square, and not a plaza, park, amphitheater, etc.

When referring to Fargo’s Broadway Square repeatedly and in familiar and fond terms, we do so by calling it “The Square.” Please note “The” and “Square” should always be capitalized in this context, making it a proper noun, with a modicum of respect.

Writing For & About FBS

Broadway Square’s voice is one of bold authenticity, inclusion, and respect, with the occasional streak of playfulness. We aim to be professional, knowledgeable, approachable, fun and welcoming to all.

Be clear and brief. Always make the language simple, inclusive, and easy to understand,yet true to the message that you are trying to convey.