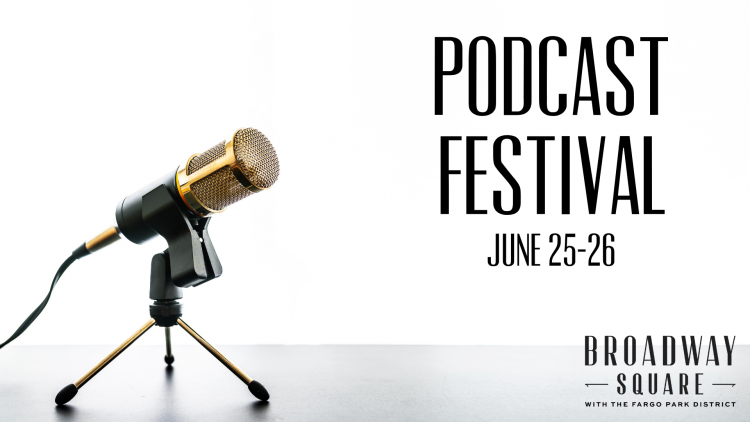 Are you hooked on podcasts? Us, too! We're keeping it a bit more low-key this year as we explore the art, craft and demand of the podcasting world. At this event, we also want to know what fascinates you about podcasts, which ones are your favorites and what podcast discussions you want to hear.

Friday, come to Broadway Square to learn more during panel discussions with industry professionals and hear guest podcasters talk about the "why" behind what they do, hear about their experiences and challenges as podcasters and ask Q & As during a Podcaster Experience panel.

Saturday, swing by The Square to listen to your favorite podcasts and others recommended by other community members, including the podcasts of the presenters from at Friday's festival.

This event is free and open to the public.

Broadway Square and podcaster Megan Torgerson (Reframing Rural) will welcome you to The Square's first annual podcasting festival and provide a quick summary of the event's schedule for Friday and Saturday.

Bill Morehouse (Forum Communications) and Bill Thomas (Prairie Public) discuss the role of podcasting in today's media landscape as well as the format's strengths and weaknesses. They will also discuss the resources podcasters need to consider when contemplating starting their own podcast.

Tracy Briggs is a News, Lifestyle and History reporter with Forum Communications. Tracy began her career as a broadcast journalist - producing, reporting and anchoring the news at WDAY-TV. The love of history stories started then when Tracy did a yearlong series on North Dakota's Centennial in 1989 and another yearlong series, "Our Century" in 1999 about the biggest 20th century news in our region. The following year, the series "Our People" covered notable people in our communities.

After 17 years in television news, Tracy wanted a schedule more conducive to being a mom of two young children. So she took a job as a morning drive time radio talk show host in 2005. She's been working in digital content and multimedia news with Inforum and The Forum since 2010.

During her stint she wrote and appeared in two weekly lifestyle segments, "The Great Indoors" and "The Scoop with Tracy Briggs," which focused largely on food and baking. In the past year, she turned her focus to history; in addition to regular history features, she contributes to The Vault podcast.

She earned a Bachelor of Arts in Journalism from the University of North Dakota in 1986 and a Master of Arts in Mass Communication from North Dakota State University in 2001. When she's not in the archives or writing, she loves to bake, do genealogy and unwind with way too much TV. She also loves to spend time with her husband and two daughters (Four daughters, if you count her two crazy dogs, McKenna and Winnipeg).

If you have ideas for historical stories, you can reach Tracy at tracy.briggs@forumcomm.com

Tracy Briggs (The Vault) and Meg Luther Lindholm (Uplifted) will join us to talk about their experiences creating successful podcast series - what challenges they've encountered, what their favorite part of creating podcasts is and how podcasting fits into their daily life. They will also answer audience questions.